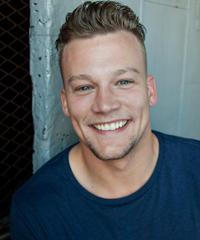 Our former student, Robert Cormier, has had roles on TV series’ such as “Designated Survivor” and “Blood and Fury: America’s Civil War.” He played the lead character of Eddie Catelli in the theater production of “Inch of Your Life: Episode 1,” which won the 2016 Fring Festival Patron’s Pick Award. Robert has multiple projects set to release in 2018, including “The Intersection” and “Transmission: Vol 1.”